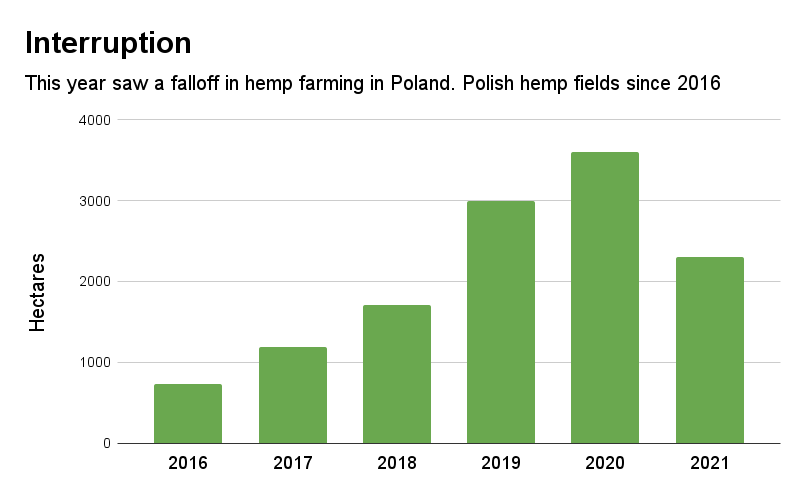 Hemp fields in Poland fell by roughly 36% this year after many farmers pulled back due to subsidies being blocked for the FINOLA oilseed variety, highly popular among Polish growers. Hemp fields totaled 2,300 hectares, down from 3,600 in 2020, according to state farming records.

Poland’s Agency for Restructuring and Modernization of Agriculture (ARiMR) declared last March that supports for Polish farmers planting FINOLA this year would be blocked claiming the variety was found to express excessive THC levels.

The clogged global pipeline for CBD was a lesser contributor to Polish hemp fields shrinking in 2021, according to Kowalski.

Getting FINOLA seeds back into Polish fields, and pending legislative changes could help to get the country’s hemp sectors back on track. First, an amendment under consideration in the Polish parliament would end the country’s outdated crop zoning system, which stakeholders have said can speed up the growth of hemp fields if the changes are carried out effectively.

Under Poland’s existing regulations, hemp zoning requirements oblige regional governments to take into account “local demand for raw materials, local traditions and local level of drug-dependency risk.” Farmers must declare their hemp fields by total area in autumn before the next year’s planting season under the system, which has its roots in central planning from Poland’s communist times.

Under the proposed new system, growers and buyers would only be required to register in the National Center for Agricultural Support through local governmental units that would issue permits. While stakeholders have pushed for abandoning the zoning system, some worry about the implementation of a replacement program.

“It poses a risk that the old system will be deactivated while waiting for a new one to start working that might take 2-3 years,” said Kowalski, warning that would freeze Poland’s hemp sector.

The amendment, which had a reading in the Parliament this week, would also eliminate the need for growers to have buyers lined up before hemp crops are planted. That requirement would be dropped for harvests intended for the production of food, animal feed, fertilizer, natural pesticides, insulation, building materials, energy, and veterinary, beekeeping and textile products. Individual growers could cultivate up to 1 hectare per year for their own purposes.

Meanwhile, a second single-issue bill that would raise Poland’s “on the field” THC limit from 0.2% to 0.3% has been submitted to the European Commission for consultation. That change should eventually be established in Poland because the Commission has already signed off on the 0.3% benchmark. The limit increase is expected to come into effect across the EU in 2023.

Some EU countries have already re-set their THC limits to 0.3%, and the Czech Republic recently boosted its limit to 1.0% THC.

Cannabis and hemp specifically have been points of discussion in parliamentary sessions over the past couple years in Poland, as public support and awareness have grown steadily. Stakeholders have said the changes in the proposed amendment could spark pent-up interest among farmers and result in more and more fields dedicated to hemp.

Poland’s hemp sector produces straw for fiber and hurd, seeds, and flowers for CBD-based products. Cultivation seeds from some Polish hemp varieties are finding a market in other European markets and North America.