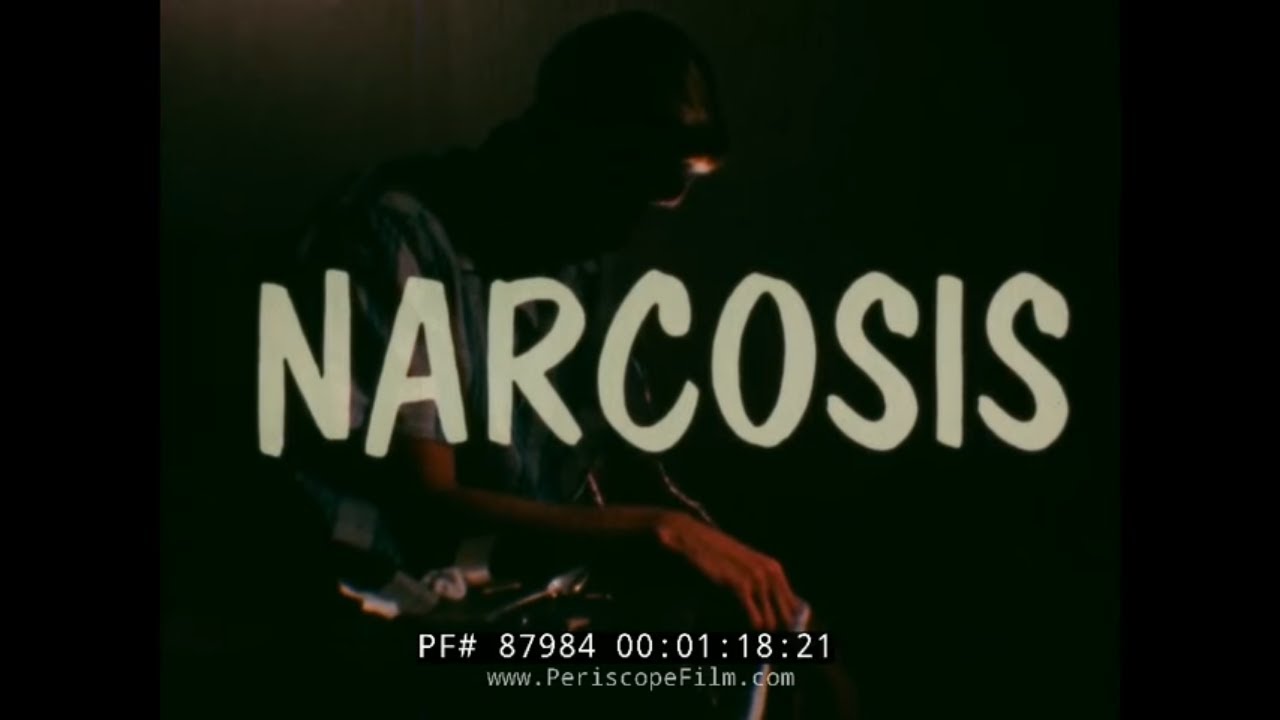 Education
Share on Facebook
Share on Twitter
Share on Pinterest
Share on LinkedIn
This color educational movie “Narcosis” is a “scare film” about the realities of heroin and drug addiction. We believe it dates to the early 1960s, possibly 1962. It was produced by Golden State Film Productions of Berkeley, California and directed by “The State of California Bureau of Narcotic Enforcement” (1:33).The title narcosis refers to a state of stupor, drowsiness, or unconsciousness produced by drugs. According to a card at 1:50, actual addicts appear in the film. This version of the film includes two crudely-spliced-in promotions by a Christian organization promoting religious tracts and products for keeping youth on the right course.

Opening: A car pulls into a lot and we watch a drug deal go down. A man in a trench coat waits and looks. A man gets out of the car and goes over to trench coat guy. He hands him a pack of cigarettes, but something else is in the pack. Title: NARCOSIS (:06-1:55). Now, a segment that appears to be added to the film — a promotion for a Christian organization. A man, apparently a Christian religious youth leader from Southern Bible College in Houston, Texas, sits at a desk and speaks to the viewer about the importance of the production of tracts aimed at affecting youth. The man holds a book “It’s Great to Be Young” and encourages young people to read it. He also shows a Pentecostal Youth Gospel record which he notes can be ordered from “the national office” in Joplin, Missouri. He introduces “Narcosis” — the film we are about to see is about drug addiction and reaching youth (1:56-3:51). Quiet, tree lined street. Inside a home, a young man has cannabis on the floor. He sits, listening to records, with a female. The man rips the leaves of the cannabis and starts to create a marijuana cigarette. The joint of marijuana is shown being rolled (3:52-5:56). A joint is rolled tightly. The man hides the marijuana when his doorbell rings. The doorbell rings again. A couple shows up and the two couples sit and talk. Marijuana cigarettes are exchanged. The marijuana is smoked and passed to one another. A woman smokes as well. Records spin. A woman rests after smoking (5:57-8:44). One of the women didn’t smoke and is disgusted with the behavior by the drug users. Records play, the men relax, the one woman who didn’t smoke is bored. She finally caves in and smokes to join the group, she coughs. A man puts another record on (8:45-9:55). 3 major Prerequisites to Drug Use – willingness to experiment, access to drug, disregard of harmful effects of drug. A man walks into the kitchen, Heroin equipment is laid out on the table, spoon, needle, etc. Another person helps the guy do heroin. Heroin is opened from a white packet and put onto a spoon. An eye droplet is used to add to the heron on the spoon(9:56-11:51). A match is lit and then the heroin is completed. A man rolls up his sleeve. His arm is tightly wrapped. The vein is slapped and the needle is injected. Time passes. Money and drugs are exchanged. An iron, watch, and a radio are brought in place of cash. Money and drugs continue to be exchanged (11:52-13:59). Arrested by police, a woman talks to police. A man is arrested and brought to jail. A scale weighs life versus drugs. A man lives in dilapidated house. He is a drug user with withdrawal symptoms. He sneezes a lot. He has a scarred body (14:00-16:08). The man is desperate for a fix. The addict puts on more cooties and crawls back into bed. Time marches on. The man sneezes more and has cramps. The man is in pain and suffering withdrawals (16:09-17:28). The man has many symptoms and convulses. The man vomits into a waste basket. The peddler has arrived and has given the addict some drugs. They exchange money for drugs. The addict sets up what he needs to do for his fix and gets ready to do heroin again (17:29-19:45). The man moves the white powder. A match is lit and a spoon is heated. The syringe sucks up the heroin (19:46-21:24). The man holds the needle and grabs a towel to tie himself. The needle is injected into his leg (21:25-22:54). The man washes his face and his hair. He combs his hair. The man feels better. Abscesses form on the man’s body. The man injects the needle again, into his leg (22:55-24:30). Two men walk on the grounds of a prison (24:31-25:02). End credits, the religious leader seen earlier makes another appearance, and suggests that drugs are the work of the devil — an “enemy out to destroy your life.” He also suggests that communism is attempting to create millions of new drug addicts and that “what we do for Christ must be done quickly” if this is to be averted. (25:03-25:48).

This film is part of the Periscope Film LLC archive, one of the largest historic military, transportation, and aviation stock footage collections in the USA. Entirely film backed, this material is available for licensing in 24p HD and 2k. For more information visit http://www.PeriscopeFilm.com

An Examination of the USDA Hemp Production Program
Cannabis economist talks what federal legalization could mean for OR
What is CBD? | Educational – Cibdol
A Beginners Guide To CBD Oils: Five things to know
Behind the Leaf (Episode 7): Back 2 School Drive, Doug Haubert, Hemp for Victory