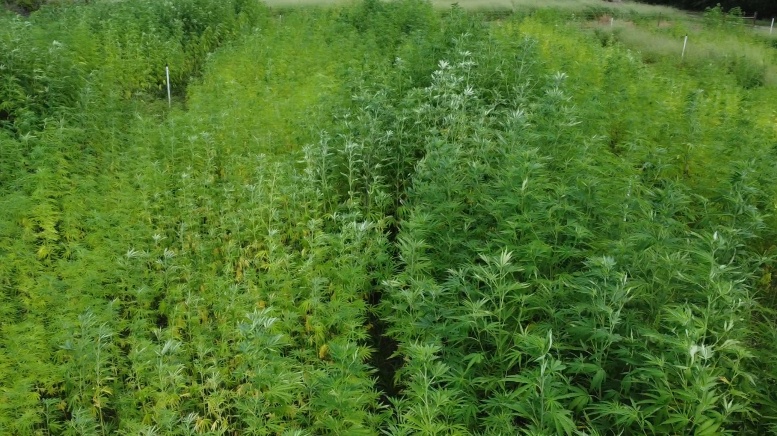 Farming hemp could help to overcome the devastating effect years of pesticide spraying has brought to Florida’s declining citrus industry, according to a Tarpon Springs-based company that is developing a strategy based on processing of the plant’s stalks.

Growing hemp to pull toxins from the soil could give orange, grapefruit and specialty citrus groves a chance to fight back against Citrus Greening Disease (also called Huang Long Bin (HLB)), a key contributor to the industry’s decline in Florida, according to hemp veteran Robert Clayton, CEO and CTO at Fi Bear, a supply chain developer that is exploring a range of basic fiber applications.

“HLB is what you get when your trees are too sick to fight the Citrus Psyllid (insect) that injects the bacterium,” Clayton said of the disease. “I think it is the end result of 50 years of spraying trees four times a year. Chemicals kill the biome and hemp shows it dramatically.”

The phenomenon is illustrated by hemp fields Fi Bear has planted in a former grove. “The soil is toxic. Hemp is yellow and anemic where the trees once grew,” Clayton said. “But it is green and healthy in rows between the trees where grass grew.”

In addition to Citrus Greening Disease, Florida growers are also under pressure from foreign competition as the industry is expected to hit its lowest production figures since around the start of World War II this year, according to estimates from the U.S. Department of Agriculture’s National Agricultural Statistics Service (NASS).

First reported in China in 1929, insects infected with Citrus Greening Disease reached Florida in 2005. The disease sets trees on a death cycle as they begin to bear less fruit that is bitter, misshapen and unsuitable as fresh fruit or for juice production.

Growers have used neonicotinoid insecticides to fight the psyllid, but the sprays also kill pollinators and natural predators, interrupting normal development of the trees and their fruits, and thereby exacerbating problems in the state’s citrus groves.

“It is easy to criticize the farmers for using neonicotinoids, but these are fourth-generation farmers and it kills them to lose great-grandfather’s grove,” Clayton said. “I really believe that some years of growing hemp will allow them to return to citrus if the psyllid is starved out or they develop tolerant species.”

“This also fuels us with a sense of mission for hemp, because we have seen this up close and personal,” Clayton said of the challenges to citrus growing in Florida. “My hemp farmer is an ex-citrus farmer, and I want him to have a future on his family farm.”

The need to stabilize the citrus industry creates a unique opportunity for hemp, said Clayton. In addition to cultivating hemp to clean up the soil, Fi Bear is developing processes to turn hemp stalks into such things as building materials, toilet paper, plant and animal bedding, and cat litter.

Farmers could also eventually take advantage of carbon credits, a sector that is in development in the USA. “The jury is still out,” says Clayton. “Exxon wants $50 a ton and President Biden wants $150 a ton. Fifty dollars only saves 12% of the costs. It won’t save the farm, but $150 per ton saves 36%. That gets meaningful.”

Contrary to the “Field of Dreams” strategy (“if you build it they will come”) being followed by overly enthusiastic large-scale fiber startups in many parts of the USA, Fi Bear is taking a more sober approach on the production side, developing plans to grow and process hemp fiber in affordable increments by focusing on basic direct-to-consumer products turned out through highly flexible, scaled-down operations that can expand through the gradual introduction of different machines to diversify outputs.

Processing must be close to the farm, preferably on it. The company hopes to use agriphotovoltaics to power processing on farms, which are often far from abundant energy sources.

“Processing consumes 80% of the carbon savings from hemp. There go your carbon credits,” says Clayton. “Agriphotovoltaics robs 25% of the sunlight from the plants, but we have abundant sun and too much sun makes too much THC. We think it will keep us green and legal.”

The company has learned how to bundle hemp stalks with a mini baler from Asia that makes round bales 20 inches in circumference and 30 inches tall, and weigh just 28 pounds. That eliminates the need for handling machines in the field and warehouse, cutting costs. The small bales also dry faster so baling can be done sooner, reducing the risk of spontaneous combustion from fermenting biomass that can lead to barn fires. It’s a handy size for artisanal hemp work and gives access to anyone, Clayton said.

In Fi Bear’s vision, those bales can be fed into mobile micro-decorticating technology in an easy-to-replicate small production chain that reduces the cost of entry in comparison to massive capital outlays required for large-scale decortication factories, Clayton noted. “We want fiber-on-demand not fiber in the warehouse,” he said

Nonetheless, “making the odd hempcrete house every few years won’t keep your farmers on board, your factory running or your banker happy,” said Clayton, who built one of the USA’s first hempcrete homes in 2014. “You must ship every Friday to cover the payroll.”

While Florida can’t be the largest hemp state because it has only 1% of the nation’s farmland, an 11-month growing window means it could be the most efficient fiber grower and processor in the United States, according to Clayton.

“We can literally plant and harvest every week, but your yields will change through the year,” Clayton said. “We save $850,000 per year in warehouse costs. The females survive the winter so it looks like grain is a winter crop. The State of Florida researched that in 1955 and did quite well, but the hemp processors went bankrupt in 1957. They also knew nothing about THC then.”

But there are challenges. Researchers in the state have struggled to find hemp varieties that will flourish and still meet rules governing maximum amounts of THC in Florida’s tropical and subtropical climates, which feature short daylight hours, high levels of moisture and high temperatures.

Fi Bear is also addressing that situation, and is achieving sufficient yields to proceed with its plan, according to Clayton. “If our work proves true, the center of gravity for hemp can move closer to the sub-tropics,” he said. “Our work is very applicable to North Africa, India or the Middle East.”